The Yoga 910 looks very similar to the Yoga 900. They both have the same dimensions, which means that my sleeve for the Yoga 900 fits the Yoga 910 perfectly. The Yoga 910 is a bit heavier because of its all-metal unibody design. Last year’s Yoga 900 had a magnesium alloy casing, and a rubber-like material inside the chassis. With the Yoga 910, the entire chassis is metal. That gives it a more premium look and feel.

Even though the hinges on the Yoga 900 and Yoga 910 look nearly identical, the Yoga 910’s hinges are much more sturdier than the Yoga 900’s. This means that there’s less wobble when typing on the keyboard or touching the screen. Take a look at the difference:

There’s also the addition of a fingerprint reader, which is always great to have. It’s quick and responsive, and always recognized my fingerprint.

This year’s Yoga 910 is focused mainly on USB C. There are two USB C ports, one USB A port, and a headphone/microphone jack combo. Last year’s Yoga 900 had two USB A ports, one USB C, SD card reader, and mini-HDMI. Because of the move to USB C, you’ll need a USB C to SD card reader or USB C to HDMI adapter if you’re looking for those functionalities.

The Yoga 910’s display is larger, crispier, and brighter than last year’s display. Even though both laptops have the same dimensions, the Yoga 910 sports a display almost an inch larger because of the smaller bezels. The display resolution is also higher, this time at 3840 x 2160; up from the 3200 x 1800 on the Yoga 900. These things are noticeable, especially when viewing them side by side. I also noticed that the Yoga 910’s display has a warmer hue compared to the Yoga 900’s cooler hue, and the Yoga 910 gets a tad bit brighter.

The keyboard is more clicky, with more tactile feedback.

You’ll also notice that that Lenovo took out the last row of “home, end, PgUp, PgDown” buttons, and opted with making every key a little bit larger. There’s also full sized arrow keys, and a larger left shift key.  The right shift key is still a tad bit small, but you can get used to that in a few days of use.

The trackpad on the Yoga 910 is about 30% larger than the one on the Yoga 900, but that’s not all. This year’s Yoga 910 has a Microsoft Precision Trackpad, which uses Microsoft’s own drivers instead of a driver from your typical Synaptics. This not only adds new gestures, but also results in a drastic improvement in general trackpad usage, scrolling, and zooming. Pinch to zoom and two finger scrolling on the Yoga 900 is a bit glitchy at times, but on the Yoga 910, it’s extremely smooth, as if you were using a touchscreen.

There’s no huge boost in performance between the Yoga 900 and Yoga 910 that I noticed. Benchmarks show the Yoga 910 is ahead of the Yoga 900 in processing power and storage speeds, but it isn’t something very noticeable in regular, general usage. That boost in storage speed does show in boot-up times, as the Yoga 910 only took 5 seconds from pushing the power button to loading the lock screen.

From 48Wh to 78Wh. It’s a significant improvement, especially since there’s a full HD model now. Lenovo claims up to 15.5 hours with the FHD model and up to 10.5 hours with the UHD model. I routinely got 8-9 hours of general usage, and always ended my day with about 30% battery. This is a pretty significant improvement over the Yoga 900, where I noticed that I would be out of battery at the end of the day.  If you’re looking for some of the best battery life in the ultrabook market, the FHD model is the one for you.

There’s no huge improvement in audio, but it sounds decent, just like last years Yoga 900. The Dolby app is again pre-installed, and there are various modes to choice between. The speakers automatically adjust when you change the laptop’s modes (laptop, tent, stand, tablet mode). Here’s a demo of the speakers on the Yoga 910:

Lenovo made huge improvements from the Yoga 900 to the Yoga 910, fixing essential every flaw of last year’s model. This year’s model has a more premium all-metal design, much improved trackpad, better keyboard, and a much larger battery. It’s definitely the better machine, but last year’s Yoga 900 is no slouch either. However, since Yoga 900 pricing is still in the same ballpark as the 910, the newer hardware is definitely the better buy. 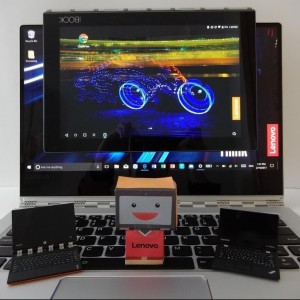